Has anyone else had this issue trying to install webhooks for stripe on a M1 Mac. I am getting this error no matter what I do, even if I click allow install in security settings.

If anyone has a workaround it would be appreciated, as my work has now ground to a stop. 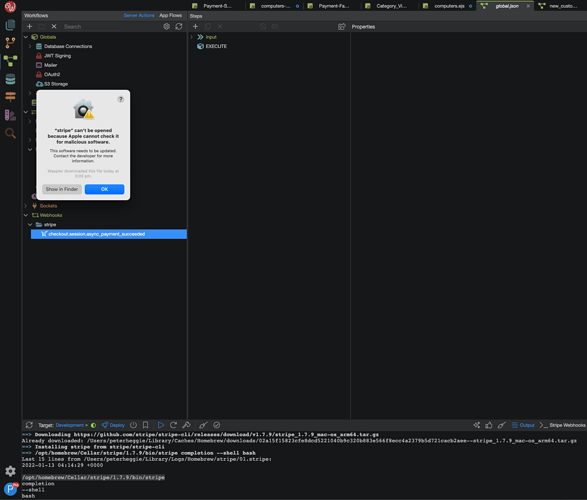 I had a hard time fixing it, refer to my topic:

Hi, Just installed Wappler and did a “System check” so it started to install NodeJS and a couple other stuff. I had brew installed previously so it seems Wappler used that. The problem is, Gatekeeper prevents the node binary from executing “because it’s not possible to verify the programmer”. I have manually added an exception for the node binary but it now complains about “libuv.1.dylib”, which I’m pretty sure it’s a NodeJS dependency. I’m now attempting to re-install things directly from th…

Edit: Try running this in the Terminal:

Well it is getting indeed more and more troublesome to auto install even trusted open source software on Apple MacOS because it is not always automatically notarised by Apple.

Happily our friends at homebrew have thought of that and introduced a special flag:

Will add it in Wappler for the next update.

One of the first things i do after installing my OS is turn off gatekeeper with the master-disable switch, and then change preferences to allow anywhere.
I would rather be very careful of what i install and run myself, then have to jump through the hoops the OS throws at me, even though i am pretty sure it’s really not a good practise.

Just one guys 2 cents worth.

Well actually Apple does two different verification checks. One for software being signed with gatekeeper and other more simple one - for everything that is downloaded from internet it is put in quarantine anyway - no matter signed or not.

So with no-quarantine or the xattr command above we are just avoiding the unnecessary quarantine of perfectly valid software.

I wouldn’t suggest to switch off gatekeeper- it is there for a reason - to keep you safe. And that is a must with all those viruses and ransomware these days.

Thanks for the extra info, and yeah, even though i disable gatekeeper i still get tripped up by CodeSign issues from time to time, so Apple is certainly getting more and more secure.
I certainly know I should not turn it off, it is there for a reason other than to bug us i suppose. Maybe i will try it again in Monterey and see if its as painful as i remember it being in Catalina

did the job for me

This has been fixed in Wappler 4.5

This topic was automatically closed after 30 hours. New replies are no longer allowed.