Bring back the Server Actions pane

Really missing the ability to split view between the server actions/workflow pane and design/code/page view. I like the idea behind the tabs in V4 but my productivity has now dropped having to continuously switch between tabs! An option to revert back would be good.

I’m sorry, server connect pane is not coming back. Neither is the old layout.

The dialogs like database query builder will be integrated in the server connect tabs. And splitting tabs is also coming.

Splitting tabs might help, looking forward to seeing a preview some day.

Neither is the old layout.

I appreciate the old layout is not coming back, but I am hoping the ‘splitting tab’ feature will enable something similar to the old layout to be displayed - ie with code/design view visible while working with server connect. Is this correct? Is this the same as the ‘split screen’ feature which has been mentioned?

I’m very curious about how this will work but I suppose I’ll have to wait and see. If we can get something like the old layout back, that would be great. The ‘old’ layout worked really well, visually and productivity-wise. It would be a pity if it’s effectively gone for good.

Well not exactly. The initial proposal is to have the server action file in a whole tab. So you will have one tab with the SC action and another tab with your page. But if we also can implement indeed Split tabs, as John suggests, then you will have like two panes with tabs next to each other (like two column design) and have for example SC action editors on one side in tabs and pages on other side. You will need a wide screen though.

Thanks Teodor. I suppose it’s not at all clear (to me at least) how this is going to look or work, but hopefully it will be as good - or even better - than the old layout. I suppose there might be some concern that the feature has been forgotten or become a lower priority, given it didn’t make it in the first release of v4.

Anyway, I’ll have to be patient (and continue enjoying the great layout as it is in 3.9.9, for a little longer).

Thanks Teodor. I suppose it’s not at all clear (to me at least) how this is going to look or work,

Just similar to what you have in VS code for example: 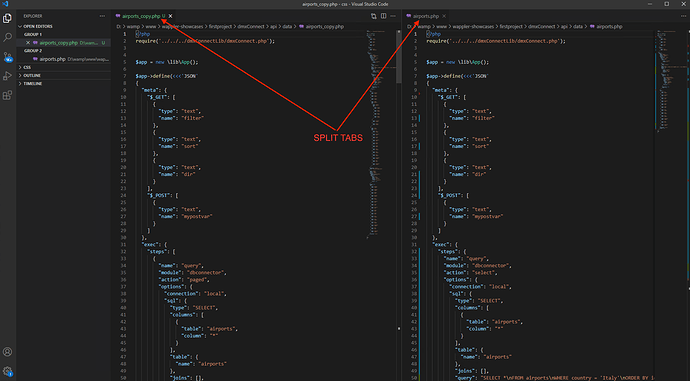 So you can keep your server action tabs on the left, and some other file on the right. That’s just an example. There is still work to be done for this after our summer break.

Anyway, I’ll have to be patient (and continue enjoying the great layout as it is in 3.9.9, for a little longer).

And i’d recommend moving to the new UI so you can get used to it. Use it for a couple of days and you will wonder how did you even work without the tabs until now.

I know some of you guys really hate changes and most of the changes are really hard to accept for you, but as usually happens - you will be thankful for these changes later.

Yep, I’ve embraced the changes and they’re great but I’m definitely looking forward to the split tabs feature as I miss having server-side and front-end on display simultaneously.

In my particular case, I like changes, in fact I get bored if there aren’t any, it’s easy for me to get used to something new as long as it means something better. In more than two years that I have been working with Wappler I have supported 100% each and every one of the changes that you made.

With the new system of tabs in server connect and as the tabs are now, I do not find it as something better but worse since it is a feature that is time consuming and that does not provide me with anything that improves the experience of working with server actions in fullscreen.

Being that I have some personal and testing projects in beta version 4.13 and it has been about a month if I am not mistaken that I have been testing it, I can say with confidence that it does not serve me to work this way.

Could it be that the experience improves when i can divide the screen in 2 tabs? Yes, of course it can be but in the middle 2 months or more passed in which I should work with a version that makes me lose time when I work?

When the divided screens arrive I will surely make the change and surely I will not have any problem since as I said before, it is not difficult for me to get used to the changes.

As a suggestion, i think it would be nice for future big updates to the Wappler UI, to do it in a separate beta slike the past 13 versions were.
That way we could all continue working normally until the pieces fit together in their entirety, as in this case the new tab system should have been accompanied by divided tabs as a new feature as a whole.

@Max_Saravia
You already said the same i a few other topics and we also said the same - there is nothing “half done” “in between” etc. in the current version.

The tabs are AS we planned them and AS we designed them to be in version 4.

I think you misunderstood me @Teodor, you already explained to me that it was not a feature made in half and I understood it. In this case I say that it is a feature that in my personal opinion should be accompanied by another so that it makes sense to me.

And for the record I only share my personal experience with the community and while it may be that many of the things I said here are similar, the context is not. I am not trying to convince anyone of my point of view, I am just expressing what I think based on my experience. Sorry if that’s not right or I bothered someone.

This is an interesting debate!

Either my server actions are very big, or my 1920w screen is very small… because in Wappler v3, once I’m looking at a serious server action, I need the server action area to be using at least 1700px width, so the final couple of hundred pixels aren’t useful for seeing anything on the client side…

I expect 1920w is very common. However, I think you would benefit from a higher resolution, obviously depending on what monitor your’re using. My main monitor is set to a resolution of 3840x2160. It’s great for using with Wappler.

Hi Antony, as Tom said, 4k resolution is the best, I use a 27 "one and it is day and night with Wappler it really improves the experience a lot since I can see the server actions, the design view, the code view and the app connect options at the same time without having to open or close panels, well at least until version 3.9.9 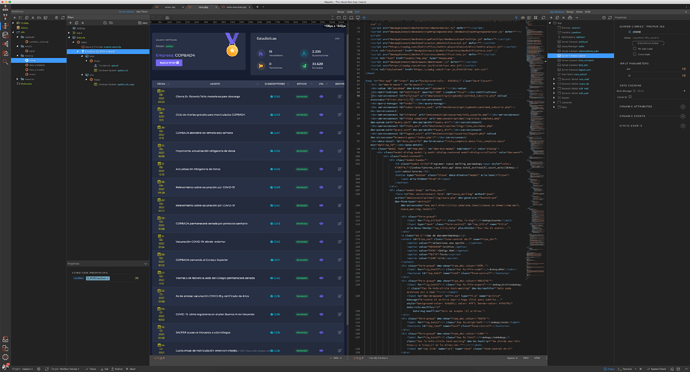 Wow, thanks for that image Max…

I just purchased a spanky new XPS17 but went for the cheaper 1920 resolution, not quite realising that with a 27” monitor I’d be able to see everything you’ve just shown in your image…

… but actually, there has not been a time I feel I’ve been held back by the pure 1920 width so far. I manage my database and CSS in other apps so usually have those open on my second screen.

I guess one day I’ll be able to put on a jet pack and fly off to another city, but I’m not missing that too much right now either!

full time nomad here, I work with a MacBook Pro 13 and an iPad as a second screen.
It’s a good set up for most things I have to do, but with Wappler it’s useless as you can’t “detach” some elements of the panel. For example : having the left panel on a different screen and keeping the design part and right panel on main screen. It’s not a big deal for me as of today but I guess this would be a huge improvement for people working with multiscreen. For nomad set up the actual UI is not optimised but I guess not that many nomads still travel those days.

14 posts were split to a new topic: Wappler low code and digital nomads

Yes I hear all of you… and change is NOT always the easiest thing to accept… and im also still on v. 3.9.9
But this team has never disappointed … and there is ALWAYS method behind the madness… and down the line … you will thank them… they have been doing this for way to long…

Yep, completely agree. I think the issue is no longer being able to view API actions and front-end pages at the same time. It doesn’t matter how many monitors you have or how high the resolution is, it’s just not possible. But we know split tabs are coming and they will resolve this issue and give us the best solution for everyone.