I notice that Wappler sometimes spins up the fan on my MacBook Pro.

I checked Activity Monitor and it seems that when Wappler is running it also launches multiple instances of something called “nwjs Helper” and all combined they take up over half my CPU. See screenshot below…

I’m working under the assumption that nwjs Helper is Wappler related because when I quite Wappler all the nwjs Helper instances disappear from Activity Monitor. A quick google search explained that nwjs Helper has to do with Node.js apps and my guess is that Wappler itself is written in JS/Node.

Just to give you an idea of what it looks like in Windows:

Yes nwjs Helper is part of the Wappler program and translates to Node.js on a Windows machine.

The important part is when Wappler has been loaded, but not actively being used, the CPU should be near enough to zero.

Wappler was loaded, but not actively being used. It was just sitting in the background not doing anything, but as you can see from my earlier Activity Monitor screenshot, the combined CPU usage of Wappler and nwjs Helper was high.

We had some discussions and clarifications in the past that might help you:

Why does my MacBook Pro fan run constantly with Wappler 2? Bugs

Usually the CPU and GPU usage with Wappler are very low. We have optimized for that. But just like with the Chrome web browser - the more tabs (files) you have open and if they are video intensive, it will use more power. If it happens all the time - maybe add a screenshot of the performance monitor. Also make sure that it isn’t any other background task eating your CPU.

Wappler uses a lot less than Dreamweaver, which hogs about 60% CPU, however if I load Wappler and let things settle, it uses really low resources.
Below is a screenshot of my usage and also my machine details. I use a MS Surface Laptop, which is really useful for my puposes and link that to a docking station, which then runs my 27" Dell 4K screen for office use. 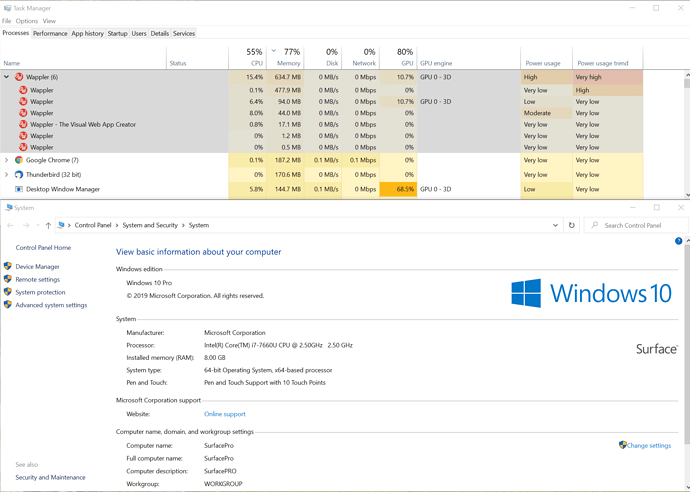 Is there some further insight on this issue? I have similar issue on my mac (recently updated OSX but didn’t change anything).

NWJS helper takes 40% (and runs multiple instances with additional 10% each) when I am not using Wappler.

I would expect the load to be a lot less when not using the application?

I’ve never been able to submit an actionable bug though.

I am very familiar with the restart wappler option unfortunately.

A big update is coming up tomorrow, we are updating the core to the latest Chrome 85, which has huge performance improve ta and lot of less memory usage!

So let see if that helps

Installed 3.3.1 and I am really sorry to say that things got worse… When using Wappler:

After a few minutes it gets reaaally slow and freezes.
Sorry to ask, but is there a way I download the previous version so I can downgrade?

What kind of page do you have open that is causing so much cpu, maybe try another or none at all for the test

Do you have an Antivirus for your mac? Are you using an external monitor? If so what A/V output are you using?

Page I have open is a regular PHP file created in Wappler. Nothing fancy.
If I switch to a completely different project it behaves the same.
When I close all windows (within Wappler) it remains at 130% CPU for NJW helper (renderer) and Wappler itself at 0.1%.

Not using a monitor, just working directly on my Macbook without external keyboards or mouse. No antivirus that interferes.

Not using a monitor, just working directly on my Macbook without external keyboards or mouse. No antivirus that interferes.

That’s a shame because it had an easy fix

I was having a lot of performance problems due to docker desktop for mac(already mitigated in latest versions of Docker), using AV software and changing from hdmi to displayport.

try closing Wappler completely (right quit from the icon in the system menu above) and make sure no other nwjs Helper processes are running on the background. Then start Wappler again.

It might happen that you have a runaway background process called nwjs Helper - that is somehow remaining of previous instance - and that is sucking the cpu.

I am having issues as well. It takes me now 8 seconds (which was nearly instant prior to the release) to display the results of a simple search on table. In browser mode it renders the results instantly. (Using Docker locally). Using the View Toggler, in Wappler, it takes 8 seconds for something that was rendering instantly prior to the new release. I am on a Mac with the latest version of Catalina. Below are my screenshots of the CPU and Memory of nwjs. I took these screenshots after quiting Wappler and restarting. Note: All nwjs CPU and Memory processes ceased after I quit Wappler. 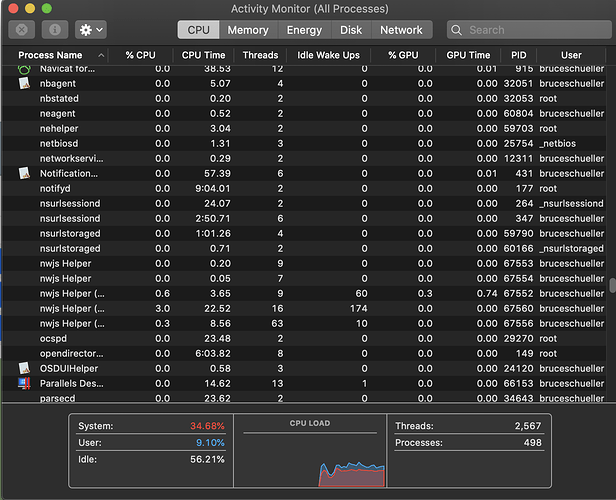 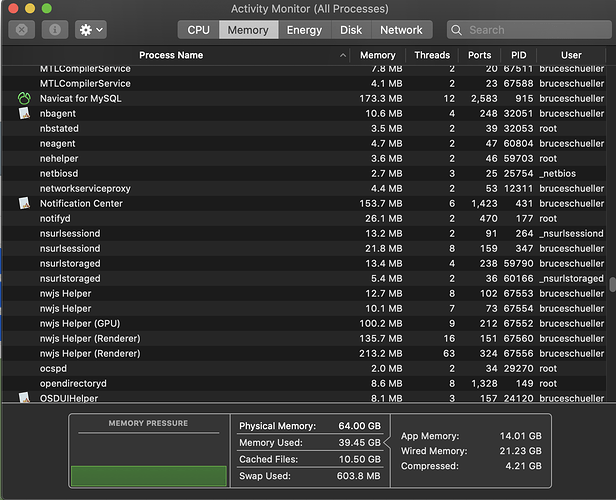 OMG what the hell are you running that needs 40 gigs of RAM?

I’ve done this and did a full reboot ensuring no nwjs processes were running. As soon as I fire up Wappler, same issue.

So even without doing anything in Wappler it uses so much cpu? Without any open editors?

If so maybe try a full clean install as described in

Reinstall Wappler from scratch How To

Sometimes you need to do a completely clean install of Wappler. You won’t be losing anything as Wappler is fully self containing and also your project preferences are stored in the project folders. You will only loose your projects list but you can recreate it easily later on with the “Open Existing Folder” option in the Wappler Project Manager. Here is how to do a full clean reinstall: On Windows Close Wappler and its launcher by right clicking on the tray icon and choosing Quit on Window…