For those not looking for a story, here is the (almost v1.0) version of Tiny Opera House, a financial management tool for the smallest of non-profits in the U.S. built with Wappler in 3 months. 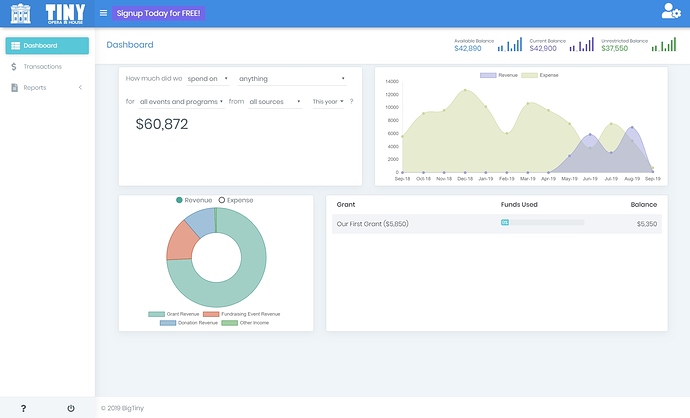 The story:
TOH was originally built (and still running for now) on Bubble and has gone through a couple versions. 3 months ago, we decided to offer a free product to the non-profit community and to use Wappler for this build. So early this past June I started to learn Wappler and build the new app.

Users can connect their bank account simply using their online credentials with their bank, and we then sync those transactions as new transactions are provided by the bank (usually a few times/day.) We have the beginnings of an engine to classify transactions but the real meat of that will be built later.) Users can classify their transactions, and tag them with various different tag types for reporting later. They can see their 990 (the US non-profit federal filing form) as well as a balance sheet and income statement. From reports, users can drill into transactions and adjust.

I’m no designer, so having a bootstrap theme as the baseline was really necessary. Most of the work done was native gui Wappler, but I did some custom work on the bank connector, as well as some drag/drop functions within the transaction tagger. I put most of the logic into server actions, as this will be reused when making our mobile app version (of course, using Wappler!)

If you feel like snooping around, feel free to use the demo at https://my.tinyoperahouse.com/demo or go ahead and create a real account and link your bank account to see your own transactions (U.S. banks only for now.)

A big thanks to Team Wappler including all the community participants! I’m feeling pretty good about getting this far in 3 months, and looking forward to moving the remainder of our application over to our new Wappler platform. I’ve already started doing client work using Wappler, with great results.

That’s awesome Ken! I’d be interested in a Zoom to discuss what your thoughts were on the transition from Bubble to Wappler and how the various components from each align. I still haven’t had time to start building Brightyard over with Wappler as I’ve been tied up with another project.

I love seeing real live applications specially if it’s focused on ONG work. And thanks for the story! Great work Ken!

Keith great to see you are considering Wappler for Brightyard. I followed closely your work on it in Bubble forum.

Hey Keith! Sure…I could do in the morning (PDT) tomorrow…after that I’m gone for a week, so it would have to be after I get back in town. DM me and we can coordinate.

Wow Ken - that is truly amazing!

You’ve build a very impressive banking and expenses dashboard that usually requires a lot of coders and tons of custom work.

As you discovered this is all doable just fine in Wappler, without any vendor lock-in. You are empowering the latest web technologies without the coding part all visually in Wappler.

Also with the great Bootstrap integration and all the dynamic components, you don’t need to be a super designer to make beautiful functional things.

Kiddos also for the bank integration! I know how difficult this can be as banks are usually very old technology based and can be really challenging to build a good integrated solution.

It is a great pleasure for us, so see such amazing solutions build with Wappler. This is our goal - to deliver the ultimate visual productivity tool and unleash your creativity by offering you the best no-code visual environment.

With your help and feedback we can continue to fine tune Wappler and extend it with more and more great features.

Keep up the fantastic work!

I have a uqestion: When you press on the side menu. Why is reloading the whole page? Should be changing only the center part.

It wasn’t designed as an SPA. Either that wasn’t supported two years ago or, more likely, I didn’t know what I was doing on my first Wappler app.

Oh! I understand. It really looks like a quality dashboard.

How did you put the floating lef sidebar?