Scott I just spent almost 3 days working on a listing table only to be told just now I need to do something completely different. I think my approach would save a lot more time. Thanks though.

Problem is as I just said - terms and definitions are very different in Wappler. So don’t know what to search for. The limiting records question I asked I only asked after searching for over 2 hours.

Whats the difference between Database Query & Database Single query and when would each be used ?

Check the docs please! It’s explained there how they work…

For example, it is evident from your post here on the forum two days ago that you were working on creating a sortable dynamic table. In the documentation, right above creating dynamic sortable tables, is the tutorial on creating paging. 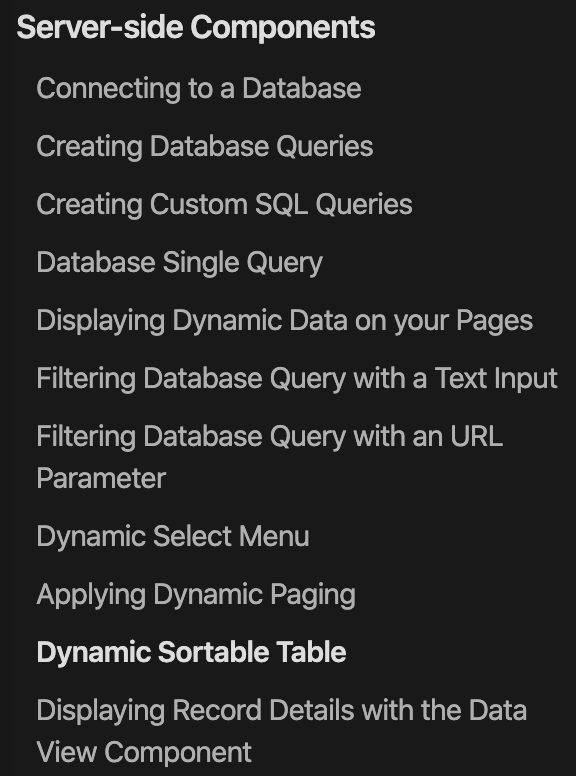 You can create a database query which returns a single record. That’s really useful in cases where you filter your data and expect a single result to be returned, like retrieving the logged in user info - so no complicated repeats are required. In this tutorial we will show you how to filter a Single Query and use the result directly in the rest of the Server Action steps. We created a server action, which is going to be used for retrieving the logged user details, so we already added the st…

You really need to look at the documentation. It’s there to help you!

As @Teodor stated, it is explained in the documentation.

All good points once I know whats going on with Wappler and how it workflow is.
Not in a million years would I have thought that Database Query by it self would not have paging as a standard thing built into it.

So if I want to search a list of records and just see those resulting records should I be using something else instead of Database Paging then?

So don’t know what to search for. The limiting records question I asked I only asked after searching for over 2 hours.

Knowing the right terminology to use can be a problem. However with a little trial and error, you should find what you need in the docs or in the forum. Eg ‘paging’ is often used in connection with limiting the number of records returned from a database query (not specifically in Wappler), and using this term, you would have quickly found the answer in the docs: 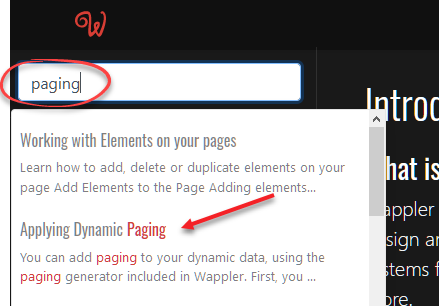 After studying the documentation a little, you would become more familiar with the terminology, which would in turn help you find answers more easily. Eg this might have helped you answer another of your questions: Convert Query to a Database Paged Query.

So if I want to search a list of records and just see those resulting records should I be using something else instead of Database Paging then?

Problem was I didn’t know paging was the term I needed to use instead of limiting the # of record display or a variance of that, that I was using

Now to me it wouldn’t make any difference how many results there are, I would think the paging query is all I should ever be using then.

I feel your pain @mikeRM. I just did the same thing; I spent a bunch of time trying to do something like the way I would have done it on another platform only to find out that my approach was completely wrong. Part of it is not knowing what we are doing is called in Wappler. Another part is not understanding how the documentation translates to the use case we are trying to accomplish. Most of the time, I just get lost in the details. But I just keep telling myself that the more repetitions I do, the more automatic it will be to do things the Wappler way. And hopefully as the Wappler community grows, people will share more and more of the standard use cases required of websites/web apps.

What might be helpful would be having a quick look at the list of relevant articles. Eg there are only about 20 articles in the list of Server-side components. Just their titles might give you the necessary clue as to the terminology, and then you could explore in greater detail: 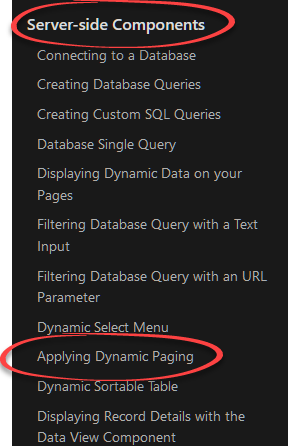 When in doubt you can use the paged query in almost every case and it will work technically. May not always be the best practice or the most efficient but it works in most cases. I know when I first started I used the paged query for everything until I learned the differences.

I should also add that if your are showing the details of a single record, do use the Single Query.

Understand that and that would be based on a URL variable I assume too.

the 3 Database queries should be combined in just one Database Query not the 3 separate one they have now. Way to confusing I think to have it separated out in to the 3.

Understand it was Paging and how its used within Wappler that was the issue.

You hit it on the nose.

The other problem is as a former Kollection user I got spoiled, the kollection team i think knew their user base more closely and did a lot of things for them that people generally never knew behind the scenes .

I’m beginning to learn that Wappler is on the high middle end between advance programmer and beginner programmers. Instead trying to bring everyone up to their level they should instead be bringing their skillset down to everyone.

Anyway this thread has proved useful thanks again.

Out of interest, and just my two cents worth, what I did was went through all the docs first, even though much of what I was reading made no sense to me in many cases, and where it made little sense, I did some testing on that part in Wappler.
That took me about half a day to be honest, but I’m pretty slow in general with most things.
This helped tremendously later on, as when I was thinking “ok I need a repeat” I already sort of knew where to look, then I would quickly read the doc categories down the left, find the one that sparked a small memory and re read it before doing a particular operation.
I also used ADDT and then moved onto DMXzone and now Wappler so it did make it a little easier.