Going Round & Round with "Linked Action Steps Warning to be Saved

In working on this php page to send emails I keep running into a time-wasting loop when I want to check the properties on these actions steps.
While looking at the 3 properties below my Connection Step 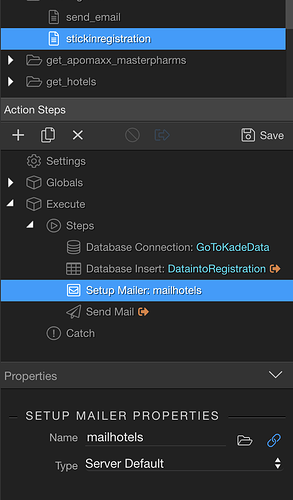 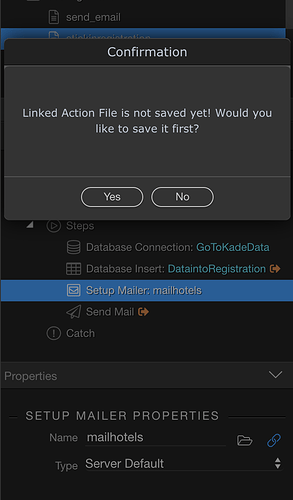 I go through the individual Save steps thinking I’ve taken care of this.

But then as I try to move up to the Database Insert step the warning is there again.

I’ve tried unlinking the files and then saving from the top down but I still can’t get the Warning to stop popping up when clicking the last 3 to check properties.

Interesting, never even noticed the mail step had a link, in the docs, it does not look like it is selected to be honest, will look at that more, i am intrigued now.

never even noticed the mail step had a link

Hi Paul, the link button is used in steps which you want to reuse across different server actions without the need to set them up every time - such as database connections, mail setup etc.

Which means that in the mail step, you don’t really have to use it then i suppose if you not planning on having any other actions that use a mailer setup. You Wappler people thought of so much background stuff i’m sure half of us never even notice or just take for granted.
I sat pondering over a database layout, sleepless for 2 days, I can not begin to imagine the whiteboard of sticky notes and drawings you guys must have up in the office with your plan.

The LINK button has been a topic I wanted to raise a week or 2 ago.

Since then I’ve followed what happens to the API files when actions are Linked & when they’re not. LINKED changes what’s written inside the Connection API.

This, I believe, is why I claimed that “pages were changing overnight”.

I was using Connections by name that already had code embedded from another page I had written. Then, when I picked this Connection by name AGAIN for something new it was already “tainted” from the preceding page.

When I used a previously LINKED Connection I’d add new action steps. Wappler would ask me if I wanted to SAVE these CHANGES.

So now I was REWRITING the same Connection file with NEW action steps.

The page that WORKED but contained this same Connection defined yesterday was now failing a day later because that Connection didn’t have the same Action Steps anymore.

Here’s 2 Connections that I applied custom names to
But what started out as a Connection to the same database
got Action Steps added – bound – and the consequences of using what seems to only be a Connection file change because Action Steps that were different were Bound or Linked. 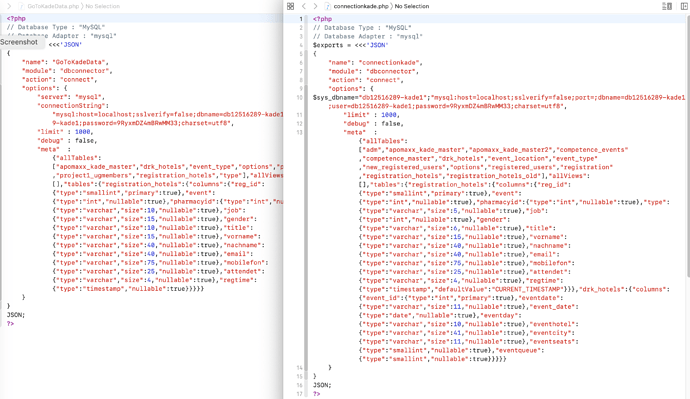 I tend to explain linked files as being the server action equivalent of a server side include but for 1 step only.

They are saved under the name of the specific action step, save a different action using the same name then it will overwrite that previous file. I rarely use it and when i do it mainly is for database connection,security providers,mailer setups and occasionally for API definitions

Thank you for bringing some more experience to my learning phase.

I rarely use it and when i do it mainly is for database connection,security providers,mailer setups and occasionally for API definitions

“Use IT” – You mean you rarely LINK files when you are adding action steps to your initial connection on a page?

How do you interpret my current Action Step setting? 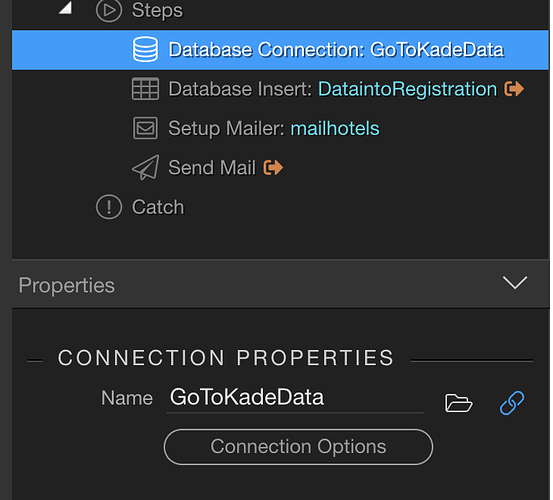 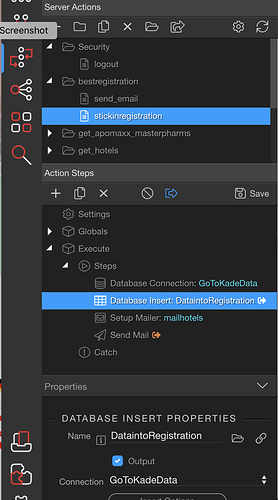 So some files that I had linked before are unlinked now –

So files that were included in my Connection File, including the Send Email action steps, are now Dropped as Includes in the Connection File – If I understand correctly.

These files now have to be on the online server in the proper folders for this form to work – is my presumption.

Thanks to Teodor, Paul, Ben!

I fired off some screenshots of my first Beautiful HTML email that arrived immediately.

One Small Step for New Media, One Giant Leap for the same dimwit!

So happy you got this all working, really happy for you.

Only question i still have, and i tried to even reiterate it in my video, is why you have more than one connection step in the first place, i mean 2 maybe maximum if you have a testing environment and a live environment, or maybe 3 if you have some extra DB servers setup from a security standpoint, but generally.

I website, i database connection file, linked should be perfect.

Anyway just trying to find out from a pure interest sake, oh and BTW, Hyperbytes is Brian, not Ben, lol

As to your question, and a fine, fine question it is indeed –
I am working at 4:30 am to get some other things working.

You, sir, PAUL … are either up early or up very very late.

These are my hours

5:30am here, also trying to finish a deadline, lol

I tried to find the Link to your new Video – the one I clicked in one of your posts just brought me to your forum comments about what you had done.

Here it is, i added it to the main docs for server security

Haha, thanks for asking I had forgotten to attach the video to the post, its corrected now.